Origami Fold a T-shirt into a Diaper - No Sew!

Call me completely crazy cheap or really adverse to sewing, but I was thinking up ways not to sew more cloth diapers since a few more of my store bought ones have made it into the rag box. I already had the emergency No Sew Hand Towel Diaper, but really, how many of us stop using hand towels until they crumble? I don't have a pile of old hand towels. When I am through with them, they are truly rags.

So, back to my old stained t-shirt pile. (One freebie from hubby's work just got added to the pile because he won't wear tshirts without pockets.) Why couldn't I use a t-shirt like a flat fold diaper? No sewing required, use up the old t-shirts!

So in the middle of the night while hubby was sleeping, I am out in the sewing room trying to figure out the best way to fold a t-shirt into a diaper with no sewing modifications. I am sure if he were awake he would have thought I had gone insane.

The best way to do it was the origami fold. You do have to learn the origami fold, but it isn't too tough, just have to get the triangle part of the fold down which is a little off in the tshirt since it isn't a perfect square like a flat fold diaper is. Watch it done, and with a little practice, it's super easy. (On this page, scroll down until you see "A longer video of the 5 year old folding and putting it on a baby doll" to watch.)

This is how you can fold a t-shirt into a diaper. The smaller the shirt the smaller the diaper, etc.
First fold in the sleeves to create a rectangle. 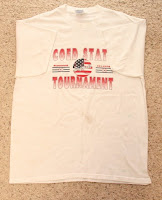 Then fold up the bottom to meet the top.

Then fold over the side to meet the side. 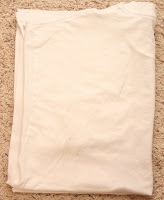 Now this is the tricky part with the t-shirt since it isn't a perfect square. Take a hold of the t-shirt at the blue "x." Hold onto the next layer at the pink "x" with the other hand. Now pull the blue "x" corner out horizontally until it looks like the second picture. It will not be a perfect triangle since we started with a t-shirt rectangle but you can make it pretty close. 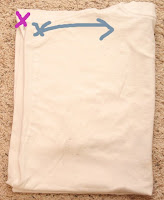 Then flip the whole thing over.

Then start folding the peice that is still a rectangle over until you put it in the middle.

Now it is ready for the baby to be put on. If you use my Velcro Diaper Fastener, put it underneath the top edge of the t-shirt diaper before setting child on the diaper. Now fold up the edge between the legs.

Then bring in the corners to the middle. Fasten with Velcro fastener or with the amount of cloth there is I don't think I would be scared at all to take one huge diaper pin and fasten it. (A snappi probably won't work well because the cloth isn't a loose enough weave.) 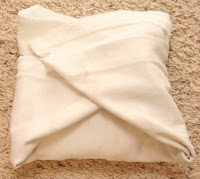 And now you have put a t-shirt on your kiddo as a diaper! There is no extra diaper liners because there is plenty of material there - Bonus for my new diaper discovery! This is my 27 month old in an XL adult t-shirt. 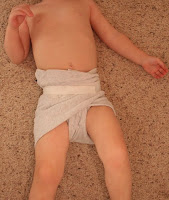 Update: So, the kiddo has been a guinea pig for a few days and they work fine; they are a bit bulky in the back and the front section could be longer for an easier fit. I did try using the pin, it wasn't the greatest, the velcro fastener was much better. I did fold them all up ahead of time and stack them next to the changing table.

I really liked it for the fact that the padding was really thick, so I didn't have to put in liners and that there was less laundry to hang since it is all one piece and it dries quickly because it's just a t-shirt, no layers to dry! So, I ventured off to make my own flat folds from these t-shirts.....
Labels: Baby Projects, Diapering Projects, T-shirt Projects

Posted by Melissa Jagears at 7:26 AM