Ok, I'm slightly proud and slightly ashamed of this project, but I must share.

A military family being given orders to move to Hawaii couldn't take their goat with them, so I volunteered to take him. We intended to get goats in the future since we aren't quite ready for them yet, but we plowed ahead anyway and took him.

So, he's penned up in our lagoon enclosure at night, but he has no shelter. The wind has been ferocious these last two days and it is supposed to rain tonight. Hubby works too many hours plus has to be finishing our housing addition before the really cold weather sets in, so I felt it necessary to take this project on myself. Mind you, I hold boards, hold the end of the measuring tape, hand him tools, suggest alternatives, use the nail gun, cut sheet rock, etc. for my hubby when he is doing projects, but I have never planned a building from scratch.

I evidently build like I sew. I hate patterns or measuring or generally anything that means it will be good enough to get a blue ribbon at a fair. So, I am out there with the table saw, nail gun and a bunch of old nasty somewhat rotten wood that we salvaged from the deck that we pulled off of the house, some scrap OSB board and some tin roofing from an old shed and I think, "I don't want to waste time and plan this out; surely I can just piece it together." So, I just sit there piecing together boards in such a fashion that they fit roughly. If I was off on measuring I was pulling on boards already nailed to get them to twist and all kinds of funny other things. But, I made a shelter for the goat. 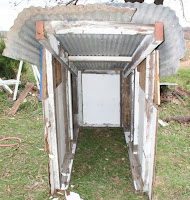 Currently it is withstanding 30 mph winds, so I think it will work until hubby has time to plan and build a real one.

Update: It was really fun to move the pen. (sarcasm dripping in previous sentence) When hubby came home, the goat had gotten out of the pen because most likely he used the shelter as a stepping stool to hopping the fence since that is where I quit killing myself to move it, so Hubby went out to move it away from the fence of the enclosure. After huffing and puffing in moving it, he told me I did a really great job considering I've never built anything before and the materials that I had to use. So now, I'm just proud of my project. :)
Labels: Manly Projects, Outdoor Projects

Posted by Melissa Jagears at 7:48 AM