My toddler is addicted to Goldfish crackers. I had been buying the whole wheat kind to make me feel better about her ingesting large amounts of goldfish, but the grocery stores here have pulled them off the shelves! So, I couldn't bear getting her the less healthy kind much longer especially at the price and amount we go through. So, I figured I could make them, but she refers to them as "Crackers Fish," so I had to make them look like fish. So I had to make a cookie cutter. I had heard about making them out of tuna fish cans, but I didn't have any of those, so I drug a root beer can out of the recycling bag.

First, I sliced one in half with a knife and then cut a strip with my heavy duty scissors all the way around.

Then I evened up the edges by cutting them as straight as possible. 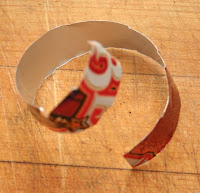 Then I worked with the strip to create the fish shape. Don't bend too often or you will crack it. I did it on my third try. Sorry that this picture is missing the last bend back to make the flat edge of the tail, but after three tries, I lost count of what photos I had taken!

Then I sneaked my stapler in the back and stapled it together. I cut off the mismatched edges. 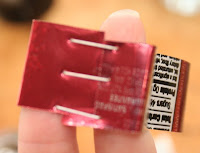 And there you have a fish cookie cutter. I have to admit it isn't the most comfortable to use, I am thinking about putting some duct tape along the top edge because pressing the piece down with no handle hurt just a teensy bit after awhile. It is probably 6 times larger than an actual goldfish cracker, but it's a fish!

And here are the goldfish crackers! They are quite yummy and pretty like in taste. My hubby hates goldfish, but he wouldn't stop eating these. Recipe follows as I made it - here's the one I fiddled with: Cheddar Pacman Crackers

Put flours, butter, cheese and pepper in a food processor. If it doesn't come together into dough, slowly add water a tablespoon at a time until it pulls together. Wrap dough ball in Saran wrap and refrigerate for 20 minutes to 2 days. Flour your surface really good and roll it out as thin as possible (about 1/8") for the crispiest crackers. Cut into shapes. Bake at 350 for 15 minutes or until browned. I put mine on a cloth while still somewhat hot to absorb some of the cheesy oil. Supposed to keep for a week in an airtight container - doubt they will last long enough for me to figure out if that is correct or not.

UPDATE: They got soggy pretty quickly. The thinner the crispier. Really need to have them in an airtight container.

Posted by Melissa Jagears at 7:46 AM

I am amazed; what a great idea. I will definitely be trying this soon.

That's great. I'm gonna post about this one on Dollar Store crafts!

You know, I was just thinking today that I wanted to learn how to make these. Thank you!

YOu...my dear...are brilliant ...and you just gained a new follower! I am totally going to do this when I get time And I will link up to your blog when I do! AWESOME!!!!

So happy to find a recipe for these crackers but amazed at how you came up with the cookie cutter! Wow! I posted about it today and can't wait to try it out. Love your blog!

Now, I need to tweak and make it Gluten Free for my youngest! ;-)

Only difference for me having 2 toddlers, no time & being "lazy" since my kiddos are not addicted to fish shapes (though admittedly more fun), I'd probably just use a pizza cutter to cut the rolled out dough into squares. Cheez-Its are square, right? ;)

Cheez-its sound like a good idea, sunrise. Plus there wouldn't be the excess after using the fish cutter you have to reroll again to recut. The less rolling out, the less tough the dough. Sounds like a smart idea to me.

Love It! We go through a bag of Goldfishies a week in my house (I try not thinking about what is in them.) This will make my daughter so happy!

This is amazing, I love the idea. I cant wait to try my hand at it.

I adore this idea! I just used it to make my goldfish cracker recipe and it was a complete success...thanks for sharing!

I just had a thought....why not fold down 1/8" of the strip with needle nose pliers & that could be the top of the cookie cutter and might also stabilize it too. Regardless, great idea....am thinking of other cookie cutters I might try....MANY THANKS!!!