Last year I bought this huge slab of beef. I have no idea what I was thinking, I am no cook. I must have had a reason, but I just had the hubby cut it in 3 pieces and place it in the freezer where its been for a year (I think). Hubby found it while rearranging the freezer, asked me what my plan was. Since I told him I've had no plan that I remember for a year, he took one out and treated it like pot roast. (We both have no idea what this piece of meat was. Sad. Sad.) It turned out really well.

So next chunk, he decides to smoke. My favorite saying is "Everything tastes better smoked." And I've tried everything in the smoker--including raccoon. So far, my pithy saying has held out--until this chunk of mystery meat. It was so gristly that my hubby, who would eat meat and only meat for the rest of his life if he could, didn't even attempt to make anyone else take a bite. He asked how I wanted to dispose of this large chunk of meat.

Figuring I could do something with it other than trash it, I decided to attempt to make stock with it. Yeah, usually you are using only bones, but it was trash anyway. So I put it in the crock pot and cooked it for 24 hours almost. I get him to help tip it out and strain it, when he starts poking around the meat and says "I think this might be decent meat now." Tore off a hunk and sure enough, a great tasting pot roast sans gristle and fat. Bonus dinner, always good news for me.

So, if you have an awful piece of meat, try fixing it by making stock. Worst case scenario is you'll still have to throw it away, but hey, you have stock!

Put in bones, meat leftovers, veggie leftovers or those needed to be used up pretty soon and whatever spices you want. I usually throw in basil, parsley, salt and garlic cloves, onions, potatoes, with whatever else I have on hand (beware, beets work, but they make your stock funny colored). I go light on the salt, can always add more.

Cover with cold filtered water. Put in one T. vinegar. Sit for one hour. (Vinegar is supposed to draw out the nutrients in the foods. Don't know if that's true, but hasn't hurt anything)

Turn on low for about 18 hours or until the smell of it drives you crazy hungry.

Then strain, put broth in large bowl in fridge. The fat will rise to the top and you can just then break it off and discard.

Freeze in ice cube trays and store per this procedure.
Labels: Recipes and Food Projects

I've been very busy. Doing a lot of things I've already posted on this blog, getting ready for baby (such as making wool diaper covers and longies) And I need more maternity pants. So, I got these off the free pile but there was a very weak spot in the knee and once I finished turning them into maternity, they ripped the moment I tried them on. Well, I had no denim that even looked nice on this blue wash for these particular jeans for what I thought would be some kind of flower patch, so all I had was the waistband I had just cut off. And long rectangular strips just cry out to be a cross. So now I have Holy holey jeans. :)

That's about as original as I have gotten lately, but there you are.
Labels: Clothing Projects

Posted by Melissa Jagears at 8:01 AM
2 comments

Someone sent this to me through an email forward, so I have no idea who this idea belongs to, but thought I'd put it up here, since I've never seen it before, maybe you haven't either. 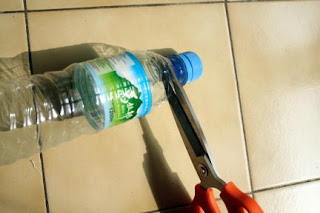 Cut up a disposable water bottle and keep the neck and top, as in photo.
Insert the plastic bag through the neck and screw the top to seal. 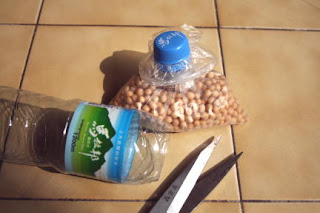 Posted by Melissa Jagears at 7:58 AM
8 comments
Newer Posts Older Posts Home
Subscribe to: Posts (Atom)
My job is to save my family money since I'm not making any! So, here is the place I share all my attempts and projects. Hope you find some inspiration to make do with the not so new.