The Presbyterian Church Thrift store has $1 bag days about once a quarter. I had nothing in particular in mind to get while there, but just needed some retail therapy. So it requires some out-of-the-box thinking. And I can always donate things back if they don't work out and I limited myself to one bag, stuffed how my ex-army husband taught me how to stuff for maximum volume capacity. 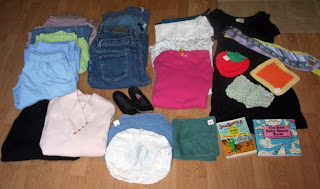 Description follows: Left to Right, back row first
*6 pairs of larger ladies pants without much sewing through the elastic to salvage the elastic from (I went initially to the sewing department hoping to see elastic (Nope) when it hit me--I'm surrounded by elastic!)

*2 blue t-shirts and 2 blue jeans to pair with the salvaged elastic to make cheap maternity pants/shorts.

*7 Ribbon belts. Plan to save the buckles for projects such as Nursing Cover and of course, save the ribbons for crafts

*2 cashmere sweaters for baby diaper covers and longies or the myriad other projects wool comes in handy for like mittens and chalkboard erasers.

*4 cloth napkins already done up that I don't have to sew!

Has your kid seen and envied Character Bandaids? Will your child not leave bandaids on like mine? Try making your own decorated band-aids.

My kiddo won't stop picking at something, but she won't leave a band-aid on, so last night, we got out the bucket of stickers and let her choose what stickers to stick on her band-aid to keep her from pulling it off. 24 hours later, she's still wearing it. Think it worked. 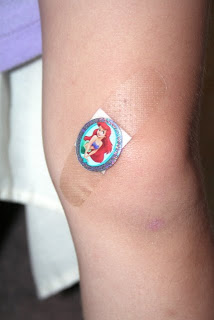 Decided to spruce up my kiddos bedding ensemble for her birthday. (She's using our old queen mattress with adult colored bedding.) But buying a queen size Princess bedding set is $80. Yeah, right. And for winter, we use feather ticks anyway, and she only sleeps with a sheet in the summer.

So, I took the off white sheet set she already had from us and dyed it pink in the washing machine with Rit dye. $4

Then I took an on sale beach towel $7.50 and made it into a pillow case, but I couldn't cut it since it's a useful item and one day she may tire of princesses. So I just folded it around a pillow and safety pinned it on.

Then I covered her own little pillow that she prefers with scrap fabric. $0

And picked up this princess canopy from the thrift store $3

Blanket she already had from Christmas.

New bedding ensemble=$14.50. Less than one set of plain pink sheets at Walmart. May not be impressive, but it's pink with princesses and as soon as she saw it she decided to pretend going to sleep. I think that makes it a winner.

Posted by Melissa Jagears at 7:11 AM
2 comments

If you are interested in swapping books over the internet or finding cheap books, check out this link.
Labels: Entertainment Projects

Posted by Melissa Jagears at 11:53 AM
0 comments

Make your own Belly Band

I personally don't use these, but if you wanted to buy a belly band for those in between stages of maternity when you are wearing your regular pants, but unzipped. Why buy one? Make one out of a t-shirt.

Posted by Melissa Jagears at 7:35 AM
1 comments

(Which is actually more expensive than the shorts I am using for the model. If you have a JCPenney's in your area, check maternity at the end of the season. I bought maternity stuff there several times before getting pregnant at end of season sales. Most things were around $3 - 90% off.) 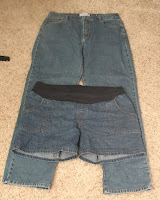 Then I took measurements from the crotch seam, front was 6.5" and back was 13".

I ended up accidentally cutting it about 11.5" in the back but they really should have been 13".

Then since these were pants, I cut them and then hemmed them. I also took the extra fly material and zipper out and sewed that shut. 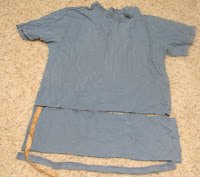 Since it was a bit bigger than the waistline of the pants, I lined up one of the seams with a side seam, pinned, and then cut it to be the same size over at the other seam (leaving about a .25" for the seam) Then sewed it back into a circle.

I then took 1.5" elastic and cut 35" (I would have been more comfortable with less inches now that I'm wearing the pants. They don't fall down, but I'd like a little more snug feeling). I sewed it flat against each other, zigzagging the ends on both sides.

Now, I took that 6 inch band and folded it over. Then I placed it around my shorts with both open rough edges lined up with my cut pant edge.

Then, I slipped the elastic in between the two layers of t-shirt, it did kinda scrunch up my pants around the hips. Then I pinned the t-shirt along the edge of my cut off pants.

Then I serged the material all the way around.

Once that's done, just flip the tshirt and elastic up and you're finished.

Now, as you can see the back is a little low for my "growing more generous" rear end. I needed that thirteen (maybe more) inches. But looks just fine considering maternity shirts are long and not tucked in.

So, I already mentioned my refashion last week failed. I was attempting to not only make a dress out of some unlikely material, but since I needed a semi-formal dress for an upcoming conference, I also thought I might as well attempt to make it a maternity dress. But I needed a pregnant mannequin.

So I searched all over the house for something I could strap on to the mannequin since I am not full blown pregnant. I really wanted a basketball to duct tape to the thing, being nice and round and I really didn't relish the idea of attempting to make a stuffed pillow in the shape of a pregnant belly.

So, the roof was leaking at the point we stopped putting on the roof. Joy. But it made me move aside some carpet padding. Hmmm.

So I made a large circle. And then cut two lines about one third of the way in opposite each other.

Then I folded the piece up until it made a fairly large "belly." And secured with duct tape along the cut.

And duct taped it to the mannequin. Viola!

Works pretty good except for the two slightly pointy spots on the belly. But it was just to help me make a dress, that of course, I couldn't do for I'd gotten over my head. Maybe I can think of something else to make needing a fake pregnant dummy.

Posted by Melissa Jagears at 7:58 AM
4 comments
Newer Posts Older Posts Home
Subscribe to: Posts (Atom)
My job is to save my family money since I'm not making any! So, here is the place I share all my attempts and projects. Hope you find some inspiration to make do with the not so new.