If you are big into yarn craft and want a Tiltaswift, a yarn skein carousel for winding yarn, there are two tutorial on Webecca Says using household items. 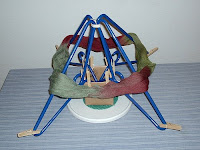 Posted by Melissa Jagears at 7:56 AM
0 comments

Community Give and Take Chest

A lady who recently moved set up a local group I am part of with a community chest. What is that you say?

Well, a person in the group begins with a plastic tote that they fill with unwanted items from their house (how many of us don't need to declutter?). Then they pass it off to the next person. That person takes what they want and adds more to the bucket. When it reaches the first person, they look through the stuff and take out what they put in there originally that still remains (which they will donate or throw away). And then it continues around. 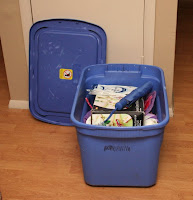 This would be a good thing for a group that meets somewhere regularly, like a knitting club, a Sunday School, a bunch of coworkers, etc. That way they bring it to a place they normally go and can pass it off to the next in line there. We actually are a Yahoo group that live in the same town, but we've set it up so the ones that normally drive past someone else is who they pass off to.

One way it's different than donating to the thrift store is you can put things in there that are still useful that a thrift store wouldn't take. Like half used lotion, makeup colors you don't like, or shelf stable food you may have opened but don't like that's still good.

Things I have gotten from the chest to give you an idea: partially used face soap, an opened bag of dried fruit someone didn't like that I used in cookies, a vase, fabric scraps, clothing for my child, a DVD, toys that a kid got bored of, a garlic peeler, etc.
Labels: Misc. Projects

Posted by Melissa Jagears at 7:30 AM
3 comments

I can't stand static in my clothing, but I have a ton of those manmade fiber clothing that get static-y. So, I used to squirt myself with water and rub myself down with a dryer sheet on those really bad items. But then I thought about the wrinkle release spray I posted on here. That should work. I scrounged for that sample packet of fabric softner from years ago (pays to hang on to stuff) and tried it out.

I sprayed this concoction all over my polar fleece static-y pullover. And it worked! Yeah! I always hated that aerasol can of anti-cling. It made it so you couldn't breathe in the same room you sprayed it, something about that just says that that stuff cannot be good for you.

Best part about it is, if there happens to be wrinkles in it, it should help pull that out too. :)
Labels: Beauty/Hygiene Projects

We mostly use wood heat to heat our house with a lovely soapstone stove my Mother and Stepfather graciously let us have. But it's a dry heat. So! Another reason to dry your clothes inside, put some of that moisture back into the air sans electricity.

(No, I don't put the clothes that close to the fire, they're just their temporarily for the photo op.)
Labels: Energy Efficiency Projects, Health Projects, Manly Projects

Posted by Melissa Jagears at 8:27 AM
1 comments

So, I made my first batch of homemade noodles with the pasta machine I found at a flea market. I didn't realize that the dough had to sit for 30 minutes before going through the machine, so I used boxed pasta for dinner instead of cooking it fresh and I needed a pasta dryer rack that I wasn't anticipating needing at the moment. So, I thought of using my clothes rack. 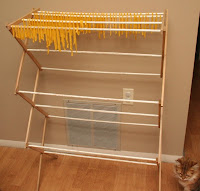 Don't think I'll even bother making a specific one, this will keep me from having an extra appliance to have to store and collect dust. I'll just wipe it down between different applications if necessary.

(P.S. When I woke up, my noodles were cracking and falling off on their own. My cat (in the bottom left corner of the picture) thought this was amusing and would push on the rack and make more fall. SO, homemade noodle makers out there, does this normally happen? I will admit that these noodles were not made according to a recipe since my little booklet was in another language and measurement system so I just eyeballed the picture and made it, have yet to try them. Plus, if you have a great noodle recipe, please share in the comment section.)
Labels: Energy Efficiency Projects, Recipes and Food Projects

Posted by Melissa Jagears at 7:55 AM
4 comments

I put up my Christmas tree for the first time in 8 years. I'm lacking a tree topper and a Tree Skirt.

So, when you become known for making stuff out of trash, family and friends pawn their trash off on you. I got this gaudy shiny curtain from my mother who thought I might make a Play dress out of it. Instead, it shall go under my tree.

I cut off the side panels and the ruffle from across the top. I cut the ruffle in half. 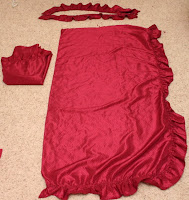 Then I am going to pin and sew on the ruffle to the side of the panel that doesn't have a ruffle.

Then I sewed the two panels to each other but only halfway up, the slit will go around the base of my fake tree.

And here it is under the tree, not exactly a skirt since it's square, but lots less sewing and cutting then if I decided to make it a circle.

Posted by Melissa Jagears at 8:17 AM
2 comments

Using my dummy from yesterday for sizing, I took this size 10 girls Old Navy sweatshirt that had been donated to the thrift store because someone didn't know how to mend the split pocket seam . . .

And made it into a toddler dress. Merely sewed up the sides, sewed new thinner sleeves and cut the sleeves shorter. Didn't do anything with the hood. Didn't bother moving the shoulder seams, so they are a bit down her arms, but I think it looks just fine. And she loves her "jacket dress."

Posted by Melissa Jagears at 7:47 AM
0 comments

I am really not a pattern follower, and my toddler won't sit still for me to drape and pin things that I find at the thrift store to refit for her.

So, I made a dummy toddler.

I first cut down an adult turtle neck to fit her pretty tight, it was ugly, had holes in the seams, etc. But she declared it a pretty princess dress. If that wowed her, anything I do from here on out will be splendid!

Then she was thoroughly excited to spin around while I duct taped her arm pits on down, but then got a bit upset doing around the neck because it kept catching her hair. Note to any other mothers attempting this, gel the kids hair/plaster it to their head before trying. Needless to say, she's not having so much fun at the end.

I made a waist line on her by having her bend at the side for reference for later and to tape it back together. Then I cut it off of her down the back. Then I taped it back up.

Then I took the leftover turtle neck material and all the other misc. things I have scrapped and stuffed it halfway.

Then I stuck it on a dowel rod planted in a piece of scrap wood. (This had been doubling for the toilet paper dispenser under the curtained sink in the guest bath, but I kiped it, it was meant to be a mannequin base.) Then finished stuffing up around it. Then I pulled up the excess turtleneck material and pinned it up to keep all the stuffing in. Viola, My 3 year old on a stick complete with pooched out belly.

Posted by Melissa Jagears at 7:31 AM
3 comments
Newer Posts Older Posts Home
Subscribe to: Posts (Atom)
My job is to save my family money since I'm not making any! So, here is the place I share all my attempts and projects. Hope you find some inspiration to make do with the not so new.