We just butchered some chickens and had to eat one. Put it in the smoker and then I had a leftover carcass. I have always just thrown it away because I'm a lazy cooker and anything that requires me watching a boiling pot for over ten minutes is not on my list of fun. But the smoked free-range carcass--I had a hard time throwing away, so I thought I'd look to see if anyone had a crockpot recipe, that I could handle.

I found this one at Nourishing Days. She has no salt in it, I threw some in, but not enough so I'll have to add more salt when I use it, but this was so easy. My crockpot cooks way fast so I only had it on for 16 hours before the smell permeating my whole entire house drove me crazy, but it was done probably before that time. Very easy! I will do this again.

But, how was I going to store it? They said either keep in fridge and take out as needed (I use it so infrequently, I doubted I could use it before it went bad) or freeze it in jars (but when I do use it, I tend to only use 1/2 cup to 1 cup increments.)

So, I decided to measure my ice cube tray. One ice cube filled to the brim was only slightly more than 1/8 cup. Perfect! So 8 cubes equals a cup.

So, I froze the stock in the ice cube trays and stored them in a ziploc bag. I'll pull out just enough for my recipe. I've heard anything calling for water can be replaced with stock to make it more nutritious and I've also heard old chickens make the best stock, so when my layers are ready to be culled I think I'll be making lots of this and using it instead of water.
Labels: Recipes and Food Projects

Posted by Melissa Jagears at 7:35 AM
7 comments

If your belly is increasing because of pregnancy but you aren't into full blown maternity wear, there are a few making do solutions. Most you've probably heard of before, but one has to hear it from somewhere for the first time (or make it up themselves) so I thought I'd post it anyway.

One thing you can do is wear elastic waistband pants.

Another is drawstring scrub pants.

Or you can take a ponytail hair tie and anchor it to your button, pull it through the button hole and fasten over to the button again. You do have to wear a long enough shirt to cover your entire zipper for this often makes it easier for your zipper to come down.

Or the maternity pants that are low waisted elastic all the way around will fit this early in pregnancy. 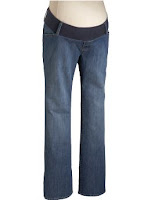 Posted by Melissa Jagears at 12:25 PM
2 comments
Newer Posts Older Posts Home
Subscribe to: Posts (Atom)
My job is to save my family money since I'm not making any! So, here is the place I share all my attempts and projects. Hope you find some inspiration to make do with the not so new.