Ok, I had to go back to the drawing board. My toddler has insisted on scratching a sore on her head for months now. I had come up with the shirt sleeve cap as a remedy when gauze wasn't working, but it would fall off in the night, and she would scratch it in her sleep. Also, after a month and a half of wearing it, she started getting tired of it. So, I brainstormed with my mother and decided an old rag curler tightly curled onto the sore area would work. I made some rag curlers like the ones we used to use, but it wasn't tight enough on her scalp.

So, I cut off the hem of a t-shirt sleeve, used it like an actual rag curler and just curled her hair down on it and tied it. It looks pretty cute. After wearing it for a few minutes, she got mad and tried to pull it off, but it stayed put. Hopefully this will work! (Fingers Crossed) 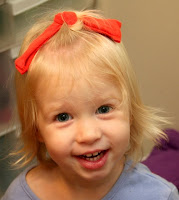 It looks like it might be a good way to keep the little ones hair out of her face as well!
Labels: Baby Projects, Health Projects, T-shirt Projects

Posted by Melissa Jagears at 8:06 AM