Build A Bear for $1 - Cute Gift or Slumber Party Activity

I was in Hobby Lobby a few weeks back visiting the Folks. (I don't even have a craft store near where I live!) And my toddler decided to fall asleep on my shoulder. I took the opportunity to browse around (although my back was killing me!).

I saw these build a bear kits. $8.99 for the smallest bear (like 6 inches tall) with a tiny bag of fluff for just stuffing the torso and a flimsy little outfit. Of course you could buy more outfits for around $5. I have seen but never ventured into one of those mall build a bear stores. One of my nieces was into it one year and the price of a cheaper outfit was $20! Crazy! You can buy a huge stuffed bear for that. So, needless to say, I just shake my head when I pass that store.

Then I got to thinking when I read a snippet of how someone had a birthday party for her little girl who wanted a build a bear party. Because the party at Build a Bear costs way too much (I think she said $300!!), she bought little teddy bears and outfits from some store and the kids picked a teddy and clothes for their own, dressed them, slept with them and they were the party favors as well.

I really don't understand how kids can think this is so much fun that parents shell out the big bucks for it (maybe because this wasn't around when I was a kid), but I was thinking, how fun can it really be to just blow in stuffing and buy an outfit? I think it would be more fun to actually create the bear, but I understand time limitations.

So, I came up with my own Build-A-Bear present.

First, I bought a bear from the Dollar Store.

Then, I cut an opening in its back.

Luckily, I pulled on it and its base was a knitted fabric for I didn't feel like I had to hand hem it so it wouldn't unravel. However, this particular bear will be a gift for a three year old and since she is too young to sew, I sewed in velcro. Maybe I would do that anyway. If building a bear is so much fun, why not make it possible to do again and again?

Then, I pulled its guts out.

Now if I had been thinking, I probably would have made the "pattern" for the dress before I unstuffed it, but I didn't. I laid the bear on some scrap polar fleece. Since this is for a girl, I used a pen to mark where I wanted the dress to go. If it was for a boy, I would have marked out a shirt or a robe. 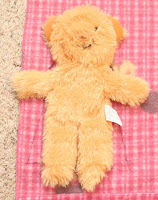 Here are the markings. I then added some width to accomadate the stuffing and clearly marked where the arm hole openings would be. 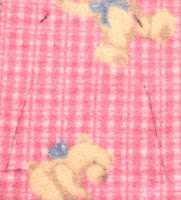 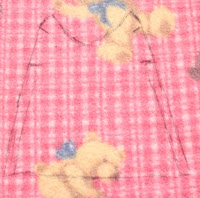 Then I doubled over the fabric and cut it out. 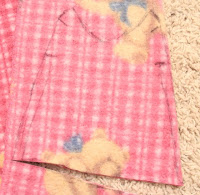 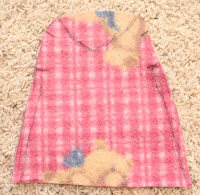 Then I cut and shaped the neck hole.
Now, if this were for an older child (10-12), I think I would leave it and just have the girl sew it up. That might be a fun party activity to sew the dress. It's just 4 straight lines. I did it by hand and it took me 7 minutes. So it would probably take a girl 10? Great opportunity to learn to sew and how much more proud would she be to have sewed the dress herself? (This is why I chose polar fleece so no hemming was involved.) I might even make this into a paper pattern and let the girls pick their own fleece and do their own cutting. You really can't mess this up too much. 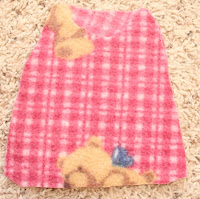 Now, I took some more fabric and made a bag for the stuffing to match the dress. I didn't sew a closure, I used a hair scrunchie to close it because I had a brilliant idea for the bag (you'll have to read to the end to find out) and what girl doesn't need more hair ties?

Now, that is how I would package the gift, but I will continue. I stuffed the bear and the velcro closure did need stuffing picked out of it, but it closed well. 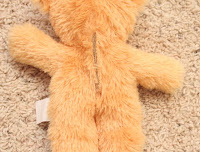 Here is the bear dressed. 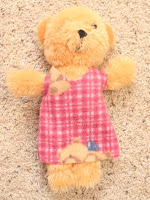 And here is the bear asleep in its slumber party bag (aka stuffing bag).

How cool would that be? Have a slumber party, the girls pick a bear, stuff it, sew up its clothing and then sleep with them that night in their own sleeping bags?!

This cost me $1 and 40 minutes of time (because I did all the sewing and stuffing, etc.)
Labels: Children Entertainment/Gifts Projects, Party Projects

Posted by Melissa Jagears at 7:49 AM

Once again, you are so clever and creative!
Blessings,
Angela

replace the stuffing with lentils or green peas and you have a beanie bear, that can be refilled at will. no catching of inner fluff, and it's environmentally and mostly pet safe. of course this only works for kids past the put everything in mouth stage.

This is a great idea! How fun!

I totally agree that Build a Bear is a big waste of money! I've also seen where you can take your old stuff animals, remove the stuffing, fill with beans or Indian corn, and make a book end out of it. I haven't tried it so I don't know how good it would actually hold up books though.

You could also tie the bag with a ribbon hair tie that can be put on the bears ear. Just tie a small piece of ribbon around and elastic (maybe a small bit of glue for the rough kids) and your done. I love this idea. My stepdaughter has three of those bears and not once has she ever played with them or slept with them, it's amazing what some parents will spend on toys!

Genius! I'm adding this to my home-made kid gift ideas file. My girls would love a present like this. : ) Love the sleeping bag solution too!

I really love this idea.. my daughter would love it too..thank you so much for sharing your creativity.. this is so much fun!!!