So last week's snow was fun; I bundled the kiddo up in so many layers that when she fell into the snow she couldn't hoist herself back up, yet when we returned to the house, she was soaked all the way through. So, since they make such good diaper covers and mittens, I figured a wool snow suit would be a great addition to those layers and should keep the damp from penetrating to her skin.
I took two wool sweaters that had shrunk very much, I don't think they were large sizes to begin with. Nice theme of stripes.

Then I took the next size up sleeper pajamas to use for a "pattern." Wonderfully, the sweater was about the same size so I didn't have to bother with altering it that much. The one with the hat won for being the top, plus the cleavage plunging slit answered my need for how to get her into the snowsuit without having to create a zipper/button/velcro opening. Less sewing for me makes me happy.

Now here is where planning would have come in handy. To match the length of the arms, I cut out a section of the sleeve to shorten it, but then later decided that I didn't want her hand poking out, but was going to just close it off. So I made myself some extra sewing. :( But if you did want the hand to be able to exit the sleeve, then I would shorten it this way to leave the pre-knitted wrist band at the end.

Then I took the other sweater and turned it upside down so the waistbands of the sweaters met. Then I cut out the legs using the pajamas as a pattern. 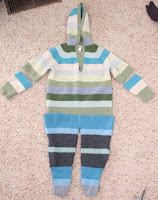 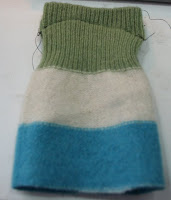 I first turned the legs inside out and sewed them back up.

Next, I took the two pieces inside out and pinned them together so that the seam folded into the inside of the suit.

Then I sewed the pieces together.

Do or die time. Could I get it on? Would it fit? My lovely model sports the newest fashion in remade winter clothing.

UPDATE: You do have to have the next size shoe up to be able to cram kiddo's foot into a shoe with this snow suit if you also have socks on underneath.
Labels: Clothing Projects, Outdoor Projects, Sewing Projects, Wool Sweater Projects

Posted by Melissa Jagears at 7:22 AM

That is SO cute and clever! I love it! I will be telling people about this awesome project (and stumbling it!)

I think you may be the smartest woman EVER!

Wow that's fantastic! I wish I had your sewing skills!

Confessions Mom,
You make me laugh! I promise I am a poor sewer. I don't know what half the buttons on my machine do and my sewing is crazy ugly. I am too impatient to sew well. If I can do it, you can do it. Anything on my blog would be rated beginner sewer I believe since I am the one that made the project up! :)

OMG !! That is so cute and so simple looking. I have to make one.

I have enjoyed so many of your ideas but this one has to be one of the best! I will be making this for my little guy and probably for our little one on the way.
Angela

I've wanted something like this for my DD this winter. I didn't know how to even attempt it. Thank you for the idea. You have an amazingly talented and creative brain. Keep up the great ideas for us who are creatively challenged.

I love your ideas. This one is genius! I have to start reading my manual so I can start this project. I received an antique sewing machine 2 months ago! Maybe it will be done for this winter, lol.