Easter is around the corner, so I had to go check out the candy aisle to look at the Peeps. Not that I planned to buy any until after Easter when I stock up on the 50% off sale, but I am obsessed, had to look. And oh my! Those things have gone up in price and down in volume. They basically shrunk the amount by half and doubled the price. Not that I should be too surprised since that is what is happening to most of my groceries, but these are my one bad splurge a year. So, grumpily, I continued shopping knowing I couldn't possibly justify buying those bad-for-me-things anymore.

Then, I got the idea that I should make them, duh! Took me awhile to find a recipe and not just a comment about how to make them. Actually, I worked off of 3 pieces of info from the net, most saying they used the Martha Stewart's recipe as a base. (Mainly this one)

It's only water, sugar and gelatin. Now I knew I couldn't spend that much on cheap ingredients anymore! There was no turning back.

Here is the recipe:

Directions
First take the package of gelatin and let it sit 5+ minutes in the 1/3 cup water til "soft." Whatever that means? It takes plenty enough time for the next step I am sure it was soft when I got to it.

Then while waiting on that to soften. Take the 1/4 cup water and 1 cup sugar and stir on medium high heat until sugar is dissolved. Then wait til syrup gets to boiling and hits 240 degrees with a candy thermometer.

Pour hot syrup into gelatin mixture and Mix on low for awhile to let it cool down some. (5 min)

Then add vanilla. I put in my homemade vanilla it was heavenly, but way too powerful! Next time, I will decrease it by half. Then increase mixer speed to medium high and mix for 10+ minutes until mixture forms soft peaks (peaks droop after being made).

Meanwhile make your sugar. I took a cereal liner, placed it on a baking sheet and sifted powdered sugar (so I wouldn't waste my blue) all over it for the marshmallow to set on. I made blue sugar by stirring in a drop of food coloring into a bowl of sugar. Next time I will just sift on more powdered sugar, but I was going for real Peeps look. 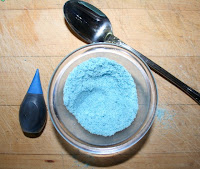 Then as soon as your mixture hits soft peak stage get ready! I tried to pipe a chicken peep with a sandwich bag with a hole in it. Well you can see how that went!

But you have to go fast! I played with my chicken peep too long and the marshmallow was already setting up so I just tried to smear it out, looks like a glop. Then I sprinkled on my blue sugar. 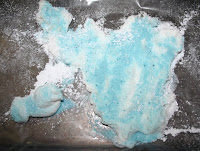 I did take the glop and cut it with cookie cutters. Here are my badly formed Peeps! Next time I will just spread it out and cut it into squares.

They are really good and now I know what non-stale Peeps taste like - highly addictive! (As if I weren't addicted already) Bad thing about this is that I will now have the temptation to gorge myself on these things year round! But thankfully they take a bit of time to make so that might curb making it constantly. But these are great marshmallows, I think I need to get just one more from the container now that I am thinking about it! :)
Labels: Recipes and Food Projects

Posted by Melissa Jagears at 8:03 AM

What a great tip and recipe! I'm not a peep fan, but my sister loves them (so do my kids). Thanks so much for this recipe.