My kiddo loves the youtube video of Natalie Portman and Elmo on Sesame Street playing the Princess and the Elephant and wants to play along. The costume for the princess is easy, any number of tiaras and scarves from the play box will suffice, but I needed an elephant hat to play along. So, I had to make one.

I just went to the thrift store with the free aisle and took several bag fulls of 100% organic material clothing for another project (yes, when I get to it, I will post it). So I had all these free clothes, and one happened to be gray, so it will become my elephant. 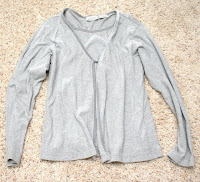 First I traced on two layers of the shirt a hat of 11" x 8" with the hem of the shirt making the band of my hat.

Then I cut 4 layers of ears. I wasn't exact because I wanted them to look floppy. 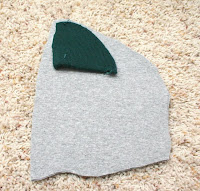 Then I folded one sleeve in half and cut it just a bit longer than the hat for the trunk. (You can just barely see it poking above the hat.) 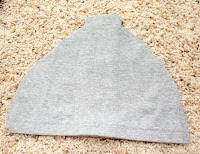 Here are all my pieces. (I thought I was going to line the ear end with the velvet, but decided I wasn't seamstress enough to handle it, so ignore those trim pieces!)

Next, I tacked on the shoulder pad to the wrong side of one piece of the ears.

Then I put the wrong sides out (There are 2 pieces of gray material under the shoulder pad) and sewed the ear all the way around, leaving a hole at the bottom to turn the ear inside out. Then I turned it right side out and tacked my hole closed to make the ear. 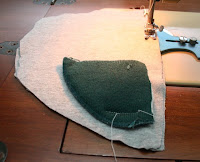 So, now I piled the nose and ears on top of the right side of one piece of hat, then I put on the other piece of hat (at the top of the picture) on top of that, sandwiching the pieces in the middle. The hat's wrong sides are facing out. (You can always pin this in and turn it inside out to see if you got it before sewing.) 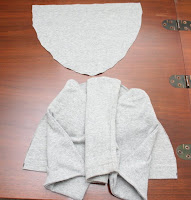 Then I pinned it. You want to sew the ears edges all the way down with the hat so it will stand out and not flop too much. 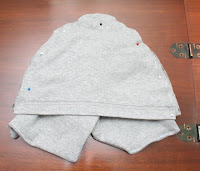 Sew this all the way around and turn out. Here is the hat finished: 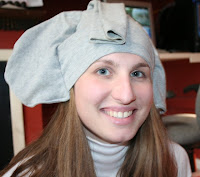 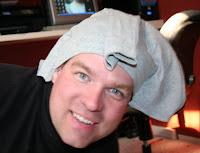 I sure hope she wants to be the elephant; I prefer looking like a princess! She sure had fun dancing and "blowing" her trunk. 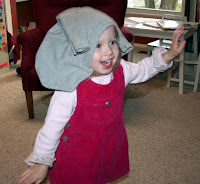 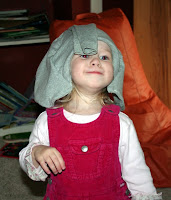 Posted by Melissa Jagears at 8:18 AM

That's cute! I've heard of people using ice cream containers to give a stiff feeling inside some projects, instead of metal. Not sure how it would hold up in the dryer though!

Is the trunk on that thing open? If you wanted it fuller I was thinking you could stuff it with some socks or something...

Anyways, you are so creative!