I made my own nursing cover that I thought was fairly clever before my girl was born, but she wasn't exactly a happy baby and really did not like the nursing cover because she did not want to be covered up. Long story short, didn't use any nursing covers.

But I have seen in the past year a few ladies using a cover that bows out in front so you can see in, maybe that would have worked with my kiddo because she could have seen out? I haven't seen one of these up close, but I overheard someone call it a hooter hider. You can google "hooter hider" and pay $30+ for one online or you can make your own. I am making this one for a gift for a friend, so I attempted to sew pretty.

Recall, I have never seen one of these things up close so this may not be an exact replica, but it is like.

First gather materials, cotton cloth (for breathability since you don't want to suffocate baby), a washcloth, some type of rings (I have curtain rings from Walmart Clearance ($1)), and the plastic binding from around big boxes of copy paper like you find at an office that does lots of copying. So total cost of project is less than one dollar since I only need two of the rings.

Then I cut the plastic binding in half, I wanted the apex of the corner to be my center. This was from a small box, so I left it that size, it basically reached from the middle of one shoulder to the middle of the other which I felt to be a good enough size. Then I unscrewed two curtain rings from their clips. I am betting I could find more options for this at a craft store, but I don't have one nearby. D-rings, I bet would even be better. 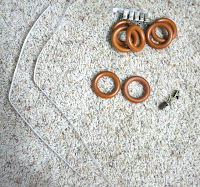 Then I cut a piece of material into a 30"x33" square, I made it slightly bigger than a receiving blanket and then my scrap piece of material limited me, but it is plenty big enough. I placed the banding at the top edge and after the initial hemming of the material, I hemmed a large hem all the way across big enough for the banding to slide into.

Then I slipped the banding into the hem and centered it. I think there was around 9" on each side. I pinned the edge of the banding and then sewed across the hem to keep the banding from moving.

Then, I got another washcloth because the baby washcloth I initially chose was worthless. Cut a washcloth in half creating two triangles. This will be sewn in the corners to wipe off little mouths. 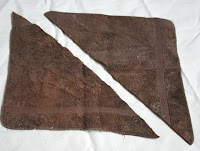 So I placed a triangle in each bottom corner and hemmed up the bottom over the top of the towels.

Then I hemmed up the sides catching the edge of the towels. And then I sewed across the length of the towel (the hypotenuse for the math enabled) to keep it stationary.

Now, for the adjustable strap. I took two pieces of the same material, cut 3"x5" and 3"x30" The long one is a bit long, but easy enough to cut to whatever length you prefer. I folded each over and sewed them around the edges, turning the cut side in to create a hem.

Then, since the fabric was so plain, I decided to try and use one of the two fancy stitches on my sewing machine to take away the blahness. I sewed little flowers down the center of the long strap and along the corners along the top line of the washcloth. The long strap to adjust, is first pulled through both loops and then through one loop. My curtain rings are kind of slick, so once it is adjusted you need to slip the strap through again to keep it from slipping. 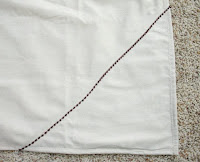 And here is the finished project and the modeled use for it. Perhaps, I would shorten the plastic binding if I did it again, I think it is a little long and the weight sags it down some.

Posted by Melissa Jagears at 8:05 AM

FABULOUS BLOG!!!! I came looking for a kitchen set.. and stumbled upon your blog.. LOVING IT!!

I totally wanted one of these with my 2nd son, but I was too tired to try to make one myself! Maybe next time I'm pregnant... :)

Wow! I am impressed!

Random aside - word verification is "nerse"...

I nominated you for an award.

I like how you used the star setting on the sewing machine! Mine has that setting and I have never known what to use it on. It looks really pretty that way! I like it in a darker thread; I kept thinking of it in a lighter thread on a dark fabric, but your reverse is much better!

I found this site the other day with instructions for a nursing cover:

It uses D-rings and boning, but the shower rings and the plastic binding are a great idea.

I'm having my mom make me one this summer when I go visit her. Can't wait!