I don't remember where I first heard about Eve Pearl's salmon concealer makeup, but I remember getting excited because I have horrible hereditary dark circles around my eyes. I have a fair complexion and my eyes look circled in brown that get worse at that time of the month. I watched YouTube Videos of her using the concealer and wanted some myself. Gasp! $42! Um, I can't bear to put up that much change for something that I haven't even tried! So I ran around town looking for some other makeup line that makes peachy salmon colored concealer. No luck. I gave up, but when a Christmas coupon for 20% off Eve Pearl rolled around, I went back to look and covet, but still couldn't make myself pay that much.

So, I started searching again and ran onto a makeup blog that made the same reference to wanting the really good Eve Pearl concealer which many on the board had tried with rave reviews, but not willing to pay for it. She said she found Everyday Minerals Pink and Sunlight concealer to make a salmon which worked well. She also said each worked well alone. So, I ran off to look at their concealers . They not only had the pink (Pick Me Up Pink) and sunlight that she was talking about, but peach (for darker skin) and a premixed peach and sunlight (Abbott's Perk Me Up) for lighter skin along with a myriad others with sample sizes only costing $2.5o. Now, I could fathom spending $2.50 to try something out.

Then, I saw that they offer a free sampler kit. So I got one of the concealers I wanted to try for free along with 3 foundations and a blush. They are internet based only which I have always loathed picking colors that I can't see but in a picture. In order to pick the foundation, their FAQs list a celebrity that would use that tone. So I got out a picture of me and searched for pictures of the celebrities in Google Images and when I seemed to "match" their skin coloring on several pictures, I considered that a good choice; I would not have picked those colors by the screen colors, so I think that was the best way to pick. So I payed for two samples and reasonable shipping $3.13. This is what I received. 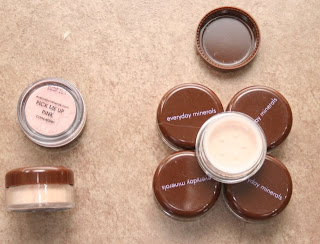 They are wonderful little sample containers that I will have to save for putting in earring backs, sequins, eyeglass screws, homemade lip balm, etc.

I have to say I am impressed with this stuff. EVERY concealer and foundation worked well. I have still to decide which is the best ones because they are so very close and good. I will have to wait for an actual sunny day to do the daylight test. I cannot say that I have ever bought a range of foundations and had all of them work, it's always been which one was less evil.

Also, a little of this stuff went a long way.

Try it. $3.13 for sample makeup is a good fun deal, and you might just like it!
Labels: Beauty/Hygiene Projects

Posted by Melissa Jagears at 7:36 AM

I got this sampler pack and really liked it... enough to switch over to mineral makeup. BUT it's still expensive stuff and you have to be careful about the price per ounce.

So far, the best place I've found price wise (and I still <3 their foundation) is KTNaturals.

They also have a sampler pack.
http://www.ktnaturals.com/index.php?main_page=product_info&cPath=18&products_id=126

Thanks! I've linked here and to your awesome Vacuum bag post. I love your ideas! :)