I inherited an ancient Kirby complete with very full vacuum bag with probably a few decade's worth of dirt in it (and still sucked well even with a ton of dirt! and I love its maneuverability) and one vacuum bag with holes in it.

I live really in the middle of nowhere and the likelihood that this town will have bags for this thing are about zilch since I can't find the bags for the vacuum that we bought 10 years ago here either. (I've been living off a clearance stockpile of bags I got a few years ago.) I was not relishing hunting for these things nor paying shipping and handling for these either. So, I figure, there has to be someway to make a reusable one and I seemed to recall in the past hearing about someone with a reusable one. But what kind of material to make it from? I searched all over for a pattern on the net, but either no one has ventured into this or no one is sharing their project on the net as far as I could find. I did find this site that had a good description of a store bought one and I went from there.

If you thought I had good sewing skills, be prepared to be dazzled with the absolute crudeness of this project!

The material she describes the store bought one being made of is "really crappy synthetic nylon type." So, nylon equals old lady colored elastic waist pants, so I went into my stash and found some awful colored stretchy purple nylon. So I cut (4) 22"x7" rectangles.

Then I sewed each panel to the other and then finally sewed the last to the first. I used a zig zag seam to make sure it was a good strong seam.

Then I needed to deal with the intake hole. I took a piece of tracing paper and traced a pattern on the cardboard facing on the bag. If I was sure this thing was going to turn out right, I would have just ripped it off, but I didn't want to kill my one remaining bag!

I then used the pattern to cut one from cardboard. Look at the thickness of the vacuum bag's cardboard and try to match it, my cardboard is a bit thicker and stresses my vacuum's clip, but it worked anyhow. And I cut it out. 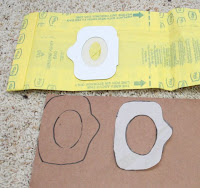 I placed the newly made cardboard thing in about the same location on the bag as the paper one. I drew an x and a circle to indicate where my hole should go. 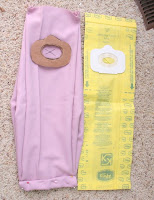 I only cut out the "x" extending its arms only to the circle's edges. 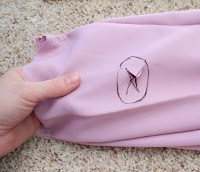 Then I took some weird velcro things that are half glue back and have non-sticky back which worked for this project. I have no idea what their intended purpose was, but I picked them up at a yard sale. So I stuck them to the cardboard piece trying to keep gaps from happening. Then I pinned them around the bag hole in as matching manner as possible and sewed them on. 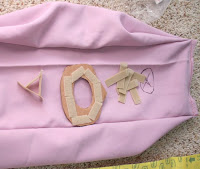 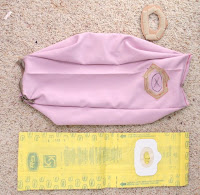 Then I took a salvaged zipper from some coat's pocket from junior high that only lasted me 15+ years that was just about the right size. (Whenever clothing falls apart on me or is not good enough to give to the thrift store, I cut off the buttons, pull out the zippers and cut out the big peices of fabric if there is any to be had and store them with my sewing stuff.)

God love me, I have absolutely no idea how to sew zippers! I decided the easiest way would be to sew it on the outside so I could be sure that there were no gaps around the zipper. I cannot even begin to describe the process I went through to put this on the end on the outside and catch all the gathers, it wasn't pretty and one side ended up weird and curvy, but it worked. I have a new pattern in mind for when I do this again that should eliminate this problem. But anyway, I got it on there somehow admist a lot of confusion.

Now I sewed the other end straight shut with a zig zag stitch. I didn't make a hem like I thought I would because who cares what this looks like. Here is the final set. Quite purty, eh? :) 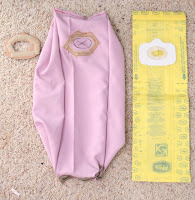 Now to test it. I had to do some more hacking at the inner ring of the cardboard platform to make it fit, but it fit nice and snug after that. 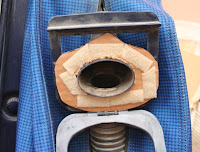 Then I attached the velcro face of the bag onto the cardboard facing trying to make sure all velcro was touching velcro.

Then I turned on the machine without putting the bag in its compartment to see if I had caught all the seams when sewing. I did not (which isn't surprising with my sewing skills). One of the folded inner sides had missed the sewing machine completely and so I took it off to sew it up.

Then, I actually vacuumed for awhile with it outside of its compartment to see if dust escaped it. It didn't seem to have any dust floating out of it at all. Very well contained as far as I could see. If it just "smoked" dust, I would have trashed the project since I don't want it being thrown into the air, but I saw nothing. Here's the little pile of "goodies" that I got after the first vacuuming of the entire downstairs.

You don't know how giddy this project made me! Not only will I not have to search for stupid hard to find bags in this tiny town or online, but now I never have to buy them again! And there is always this bubbly sense of pride when you make something from scratch when you barely know what you are doing!
Labels: Cleaning Projects, Sewing Projects

Posted by Melissa Jagears at 7:50 AM

Now that is inventive!

Great! My old Kirby might just get to live again now that I'm not running about trying to locate suitable bags!

Great job!! That is awesome! I know exactly how you must have felt! ;)

That is just so awesome!! I love your blog so much you have such great tips and ideas.

Izzy, you amaze me sometimes!!!! We have a canister vac, so it's not terribly useful at the moment, but I'm still duly impressed.

What a great idea! Thanks for sharing this with the pictures.
I'll have to make one of these,it'll be one less thing to buy!
Just found your site through http://happyheartsathome.blogspot.com/.
Love it!

BRAVA! BRAVISSIMA! I'm so impressed and want to do this. Unfortunately my sewing machine has not seen light since baby was born 7 months ago. (Vacuum hasn't been out much either come to think of it...)

how much would you charge to make one?

YES! I bought a vacuum that required very expensive and hard to find bags. I turned one of my old skirts into a re-usable bag following this model. It works so very well! I've emptied it 3-4 times already and ran it through the wash with no problems.

Thank you for posting this!

Oh Gonna try this for sure....I got one of them older models with hard to find bags....YES! Finally an answer to buying xtra online.

Great idea! Finally I can use my old Kirby again. Thanks for sharing.

Thanks for that! I just got an old kirby for free and was looking for ideas on ways to make bags.

I was just realizing that super glue or similar would probably also work for joining the fabric together wouldn't it? I am going to try it as I am a guy and although I know how to run a sewing machine in a pinch I would rather squirt some glue and clamp down the seams with books and c-clamps then sew. I will probably report back to let people know how it worked.

Jared, yes let us know if super glue worked, though I'm wondering if that's too brittle, maybe something that dries with a little flexibility? They make liquid serving for sewers for gluing and then sewing...

This is great. Now I just have to find nylon fabric. One guy on youtube instead of using cardboard opening (which by the way could be made from thicker plastic for durability)made drawstring opening, which he simply ties around the hose. I have small shop vac, which I use for the house, and that one doesn't have that sort of opening, so I might still need to make it like you did, but with plastic.

General Dollar has plastic cutting Mats the perfect thickness to cut the mouth of the bag out of ! : )

I'm going to try adding a velcro opening (w/ stick on velcro) to my current vacuum bag bottom to make it reusable.

I haven’t any word to appreciate this post.....Really i am impressed from this post....the person who create this post it was a great human..thanks for shared this with us. best vacuum sealer for food