Make Your Own Vanilla Extract

I have been using a lot of vanilla lately for cooking. I actually hate cooking, so I haven't done much in the past, but now to save money, I am cooking a lot more items and from scratch if possible. But now the vanilla flies off my shelf so quickly that I started to hate the $3.86 generic vanilla price sticker for such a little thing!

So, I am making my own! It will take 8 weeks for the first batch so I have to keep getting those $3 ones in the meantime. :( I am so thankful to a friend for asking if I had ever made my own since she had made her own. Her comment made me look it up!

I bought 750 ml of some cheap vodka from a liquor store for $5.56. I bought vanilla beans from this guy on ebay that I had heard good things about on some discussion board. (BTW he is great, my vanilla beans were evidently given quite the trip to get to me and after 2 weeks of not receiving it, he put replacements in the mail for me, the next morning my beans arrived in scuffed up written on condition so I was able to catch him before he put it out in the mail, but he was kind and ready to replace it and I am happy with the beans.) I bought the 30 vanilla bean assortment. If you buy so much you get so much free, so I got 10 free beans too for $14.59 (includes S&H) or 36 cents each.
(No it's not bad vodka in the pic, the beans are already in there!) 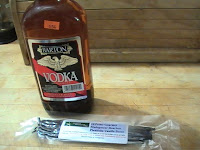 There are all different recipes out there, I have a feeling you really can't go too wrong with how many variations there are. This site had nice instructions. You're best off to use glass according to most instructions, but I decided to leave it in my cheapo plastic vodka bottle.

I chose to go with 3 beans per cup as the above site suggested, but I sliced them lengthwise AND cut into half inch pieces like other sites mentioned. So, my vodka is 3 cups worth so I put in 9 beans. I placed a sticker on the back to remind me when 8 weeks have come and gone and you are supposed to shake it once a day. It already looks and smells heavenly! Not sure it needs the full 8 weeks, but I am going to let it
sit the full time anyway. (I ended up using it 4 weeks later and it was great)

Buy some fancy little bottles and give them away for Christmas presents! This stuff is supposed to be just like wine, leave that bean in the bottle and it gets better with age.

UPDATE: I used it one month later and boy was it awesome, but I will from now on use only half of the called for measurement. It was heavenly, but very powerful! I think I could easily get away with half as much, making the savings even better!
Labels: Recipes and Food Projects

Posted by Melissa Jagears at 7:59 AM

I do this! I made it for Christmas presents one year (just like you suggest here). You can just keep adding vodka indefinitely.

Thanks for this post. I knew how to make the extract, but can't find the vanilla beans anywhere! I never thought of ebay. Thanks for the link as well. I have some Vodka (freebie from about 10 yrs ago) so this will be a small out of pocket for me!

I like the idea of leaving it in the bottle. I made some but put it in a glass canning jar but it sure is hard to get just a teaspoon or two out. I love homemade vanilla though and will never go back to the store stuff!

I never thought of ebay. Thanks for the link as well.