Make Your Own Granola Cereal

So, I am trying to figure out ways to not spend $3.12 cents on a box of cold cereal (which I love) that only lasts about 2 days in our house, so I looked up making your own granola cereal. I found several that went in the dehydrator and decided I would give making my own a try. Some recipes had raisins, some cherries, butter, no butter, etc. This is what I thought would make a tasty cereal for me and it sure did! (You can also do this in the oven, but smaller appliances take less electricity, so I chose the dehydrator.)

(Now it would be much cheaper if I forgot the almonds - It costs about $7.50 worth of ingredients and it will last almost the whole week for both me and spouse, $2.50 cents of which is nuts. So it would only cost $5 if I forwent the nuts bought at the store. We go through about 4 boxes of the other cereal costing $12.48. So perhaps this isn't the big saver that I thought it would be, but once my almond tree starts producing then it might be! I am absolutely positive this is cheaper than store bought granola, have you ever bought a small box of granola cereal for, oh, $4 and found out that 3/4 of that box was just air!!!) 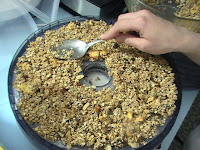 Dehydrate for about 3-5 hours or until crunchy. Save in airtight container. 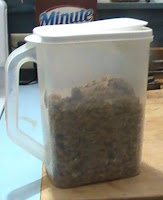 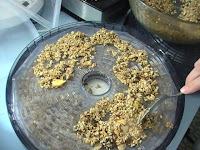 Posted by Melissa Jagears at 7:32 AM

I can't believe it! I have been searching for the past month for a good looking dehydrated granola recipe!

if you don't have a dehydrator, how long/how hot would you bake this in the oven?

I tried it in the oven once, but you can't be distracted by children doing so--I burnt it. You might try googling Baked Granola.