At my yard sale, I had a money goal. If I made so much, I got to move my futon into the office for a guest room and get a cushy couch. I had seen one at the second hand furniture store, and it was in good shape and long enough for my hubby to lay on.

Well, I made my money goal, but the couch was sold when I went in on Monday. :( But I had been so psyched for getting a couch, I went searching for another. I found one in a bit worse shape but for only $5o and in a color that would go with my other furniture (the other one would not have matched, so I had intended on buying a slipcover for it.) But, it had some cosmetic flaws, so this week, I'm showing you how I rescued the couch.

The most glaring problem was that a cat had used it as a scratching post. So I cut off the really long strings with scissors, but then I got out my sweater shaver. 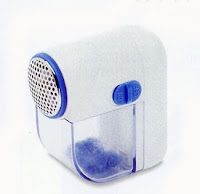 And shaved off the cat thread pulls.

Posted by Melissa Jagears at 7:38 AM

I've never heard of a sweater shaver, but here in Las Vegas, NV we probably wouldn't use them much =o) Your couch looks fabulous! What a difference! Love your blog and all your handy ideas.

I can't believe I have passed up furniture because of this very problem. Thank you so much for sharing this.

Did you every have any issue with the fabric unweaving once you cut those threads?

Did you every have any issue with the fabric unweaving once you cut those threads?

Kelsey, I didn't, but I did have trouble with a child deciding to "help" and cut the arm fabric with scissors....there was no coming back from that! But the other side was all right, might depend on the type of fabric though.