Hubby's going deer hunting and we're planning on processing the meat ourselves. Big mess calls for extra tough apron. So....

I took a chicken feed bag (any animal food bag will be of the same plastic canvas material) and cut it open. 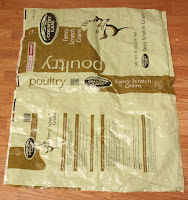 I then held it up to hubby and drew out the armpit for where he wants it to hit him. I also cut off two strips from the bottom of the bag. 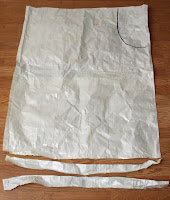 Then I folded over the bag and cut out the arm hole so it is identical on both sides.

Then I took the arm hole hole and cut off about a two inch section along the outer edge, this will be the neck thing, whatever its called. 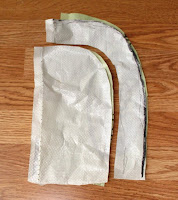 Decided to be lazy and not sew, I'm sure you could sew it, but I got out the white duct tape I happened to have and taped the neck tie together and held it around hubby's neck to see how long he wanted it. And then duct taped on the two strips for ties. 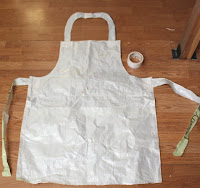 I reinforced on the back with more duct tape. 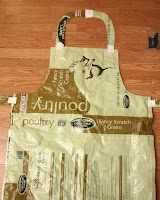 So hubby is now ready to handle a butcher's mess if he gets lucky enough to get a deer with the bow and arrows he has been busy making all year.

Posted by Melissa Jagears at 7:48 AM