Ok, this isn't something many people are going to need, but I did solve it without buying anything. My 2 year old daughter has a sore on her head going on two months now. She got it infected and a trip to the doctor fixed that, but it won't heal because she won't leave it alone. Gauze bandage rolls weren't doing the trick and were gettting costly because they would stretch out and wouldn't stay well on her head. The doctor and pharmacist suggested socks on her hands; have they ever been around 2 year olds??!!

My only idea was to buy one of those helmets that kids with sudden seizures sometimes wear, but I knew they had to be expensive and not easily found. I was thinking of fashioning my own from foam rubber when the idea of using a t-shirt shirt sleeve came to me.

I took an XL size t-shirt sleeve and cut it off. Now we have a pretty "hat" that keeps us from scratching. If she would get it in her mind to take it off, I would just use a clip at the back of her head to keep it on, but luckily she thinks it is pretty. 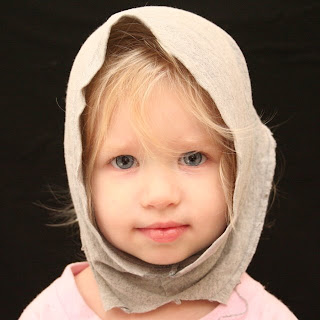 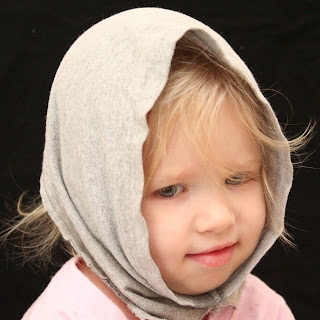 UPDATE: The XL sleeve stretched too much and would slip off too easily. I moved down to a Medium size sleeve and it is quite snug and less prone to stretching enough to fall off.
Labels: Baby Projects, Clothing Projects, Health Projects, T-shirt Projects

Posted by Melissa Jagears at 9:43 AM

I've also used a cut sleeve from a t-shirt to make a head-band/hair tie-back for our daughter, to keep her long curls out of her way while working & playing, especially as her bangs grow out!